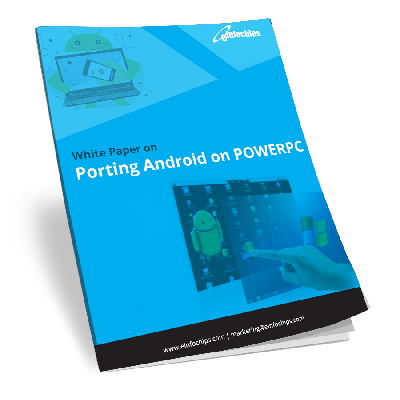 What was the customer challenge?

Currently, Engine manufacturers monitor the engine data and perform engine health management by themselves. A pioneer engine manufacturer of aerospace industry wanted to change this and give its ecosystem partners like airlines and primes, access to engine data for them to perform engine health management independently. The client wanted to develop this solution on an open platform like Android but its PowerPC based hardware didn’t support Android.

PowerPC, being a big endian architecture, does not support open source platform like Android because android supports little endian architecture. In this whitepaper you will get to know how eInfochips overcome this challenge and successfully ported Android on PowerPC.

Why is Android Porting on PowerPC a major achievement?

Currently, there are several serious challenges in the AOSP source code intended to support PowerPC. Some of these include

How eInfochips solved this problem?

The only solution was to address above challenges for the very first time. eInfochips initially worked on Android version 4.4.4 porting with Dalvik in portable mode. The only available toolchain path was hardcoded in scripts. To support PowerPC configuration, all scripts had to be modified to support PowerPC. Further details have been explained in the white paper.